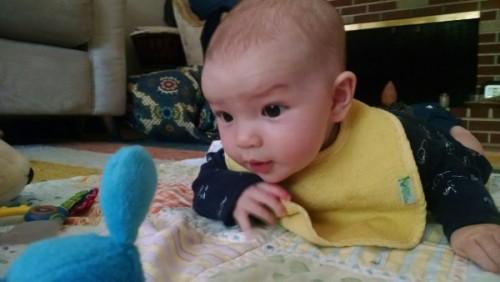 Oh, the resulting frustration! He howled and howled.

And then, he would try again.

Again, he would just touch it, only to push it further away.

As his mother, watching him, it was excruciating. I SO wanted to reach out and give him the book. And, I did a couple of times but within a matter of moments it would once again be out of reach and the entire process would begin again.

Watching him, I found myself wondering…

The skills we don’t yet know we need.

For Little D, two of the skills he is on the verge of mastering include:

If I continue to give him everything he wants the moment he wants it, he will not be able to struggle and struggle to reach it himself. Ultimately, me ‘rescuing’ him from his frustration will delay him learning to crawl.

If I give him the space to struggle and to figure things out on his own he will learn to crawl which will, ultimately, open up his little world in an entirely new way. In fact, it will open his world in ways that he can’t even imagine in his current state of frustration and struggle.