Much of my life was spent afraid I would burn in Hell.

I spent the first 13 years of my life embedded within an evangelical Christian community – the Holdeman Mennonites. We were the ones who lived in their own segregated, often farm-centered communities. They still do. The women wear dresses and black head coverings at all times; the men beards, long pants, mostly button-down shirts.

My living family was not the first to live in this way; they have been early Anabaptist – Mennonite – Holdeman Mennonite for generations. In fact, I can trace my father’s family back to the 1500s where they were part of a small Mennonite community in Holland.

As far as I can tell, they had been driven to Holland seeking sanctuary and the ability to practice their Anabaptist beliefs freely. My grandparents (my dad’s father and mother) both still spoke Plautdietsch or Mennonite Low German and would torment my brother and I by conversing in the old tongue when they didn’t want us to understand what they were saying.

My dad’s family can be traced from Holland to the Vistula delta region of Prussia (in the 16th/17th centuries), to the Russian territory of the Ukraine in the late 18th and early 19th centuries prior to immigrating to North American in 1874 settling eventually in Kansas where I was born.

Each uprooting of homeland was the result of religious persecution and the seeking of a new home where they could once again live their lives and practice their religious beliefs without fear of persecution (or of being asked to do something that countered their beliefs – ie: go to war as pacifism is a foundational belief).

My mother’s father’s people can also be traced back to the 1500s where they were farmers and also have many generations being part of the Mennonite faith and suffering persecution and uprooting for that.

It was only in the more recent generations, however, that my mother’s mother’s people joined the Mennonite faith. Prior to that they were Amish and/or not so inclined towards religious fervor (or so it appears).

There are missionaries, charismatic ministers, and church deacons in my family.

There are also disbelievers who stayed within the fold of ‘The One True Church’ despite lack of genuine conviction/belief because… where else would they go? Ex-communication and the resulting ostracization is a hard pill to swallow especially when all aspects of community, support, and belonging flows through church membership.

Essentially, these tendrils of fundamentalism run deep through my family lineages and through my body and life although things took a turn within the family history when my parents left the Mennonite faith, taking myself (willingly) at age 13 and my three younger siblings with them.

Long story short, following that departure, I abandoned all I’d been indoctrinated into and taught about ‘the world’ prior to age 13 (the virgin birth, the unerring word of God, the ONE true church, the supremacy of the deacon/ministers, the sinfulness of women/sex, man’s dominion over the Earth, etc etc etc) and went on a search for healing and to discover what was true for me.

It was exciting and freeing initially. I started wearing make-up and shorts and t-shirts, participating in competitive sports, reading every fantasy book I could get my hands on, and… finding myself becoming more and more obsessed with energy and healing work.

This obsession was fed via an undergraduate anatomy and physiology class. Jumping at the opportunity to be on the dissection team, I helped to dissect the bodies of five diverse human beings which instilled a profound sense of awe and wonder in relation to what it is to be alive in these human bodies.

Graduating with a BS in Psychology and Pre-Med, I intended to pursue an advanced degree in psychoneuroimmunology.

This isn’t what happened. Instead, I realized I was more interested in doing healing work versus researching it. With that intent I spent the next two decades studying and training with pioneers in the fields of body-centered trauma resolution work, energetic healing, embodiment practices, and nature connection.

Still, throughout this time, I kept having this nagging feeling that I was missing something. For one, my own headaches and migraines (and chronic anxiety) were unresponsive to the truly exceptional trauma and other healing work I was receiving. While I could help my clients with their pain and anxiety; my own was unrelenting.

From the outside, I’d done the hard work and freed myself from the pain of my fundamentalist upbringing. But, at the same time, I was in a place of extreme struggle, self-doubt, confusion, chronic pain, and anxiety. I just wanted to hide away forever as the fundamentalist programming of my childhood re-asserted itself in ways I could not have predicted or imagined.

Consequently, my search for healing and wholeness took me further and further removed from my fundamentalist evangelical Holdeman Mennonite upbringing… directly into animism, ritual and ceremony, and working with the ancestors to heal the wounds of the (their) past.

Now, while I still have moments of self-doubt and struggle, the old programming no longer controls me.

I am free to follow the calling of Spirit and to help others also become free of the tendrils of fundamentalism that are keeping them stuck in struggle and pain. I know first-hand how painful and embedded these tendrils are.

I know as well, without doubt, that you also can become free of them so that you can do your witchy, healing work in a way that is healthy, nourishing, sustainable, and life-enhancing.

Now, I facilitate ancestral lineage healing around themes of:

If you are reading this page, it is likely you also grew up in a deeply fundamentalist family (or culture).

As I see it, fundamentalism is a pattern that arises over generations out of unresolved trauma. It is characterized by judgement, rigidity, polarization, and a stark black/white view of the world – good/evil, right/wrong, us/them, man/woman where the two extremes aren’t just on a spectrum alongside each other but where one is situated as ‘superior’ to the other.

When the pattern of fundamentalism is separated out from ‘religion’ it becomes possible to see it manifesting in many of the troubles of our times – racism, sexism, patriarchy, exploitative capitalism, colonialism, earth-disconnection all of which also originate in the unresolved trauma of past generations, of our ancestors.

In other words, the pain, confusion, and crisis that we experience in our personal lives, in our communities, and on a cultural and planetary level are not just ours. Seeking to heal these wounds from an individual perspective of “my pain… my healing journey” will not get us far either as an individual or as a culture.

Fortunately, it is possible to heal the wounds of the past – theirs and ours.

I believe that fundamentalism can be overcome with ancestral healing, embodiment work, grief-work, and reclaiming animistic values as paths of cultural healing and repair.

My teachers and travel:

With regards to ancestral healing and ritual, my most influential teachers are Dr. Daniel Foor and Malidoma Somé. My primary trauma and energy work mentors are Uma Malcolm and Richard Valasek, both Ortho-Bionomy® Instructors. Other influences include the grief work of Sobonfu Somé, and the teachings and writings of Jon Young, Pixie Lighthorse, Dr. Gabor Maté, and Martín Prechtel.

I spent a year living on the island of Malta. While there, I traveled through a bit of North Africa (Tunisia) and Europe (Holland, Austria, Germany, England, Norway). Additionally, I spent a summer doing volunteer work in Nepal. These experiences help me appreciate both the beauty and limitations of American culture.

Finally, a little bit about my name: 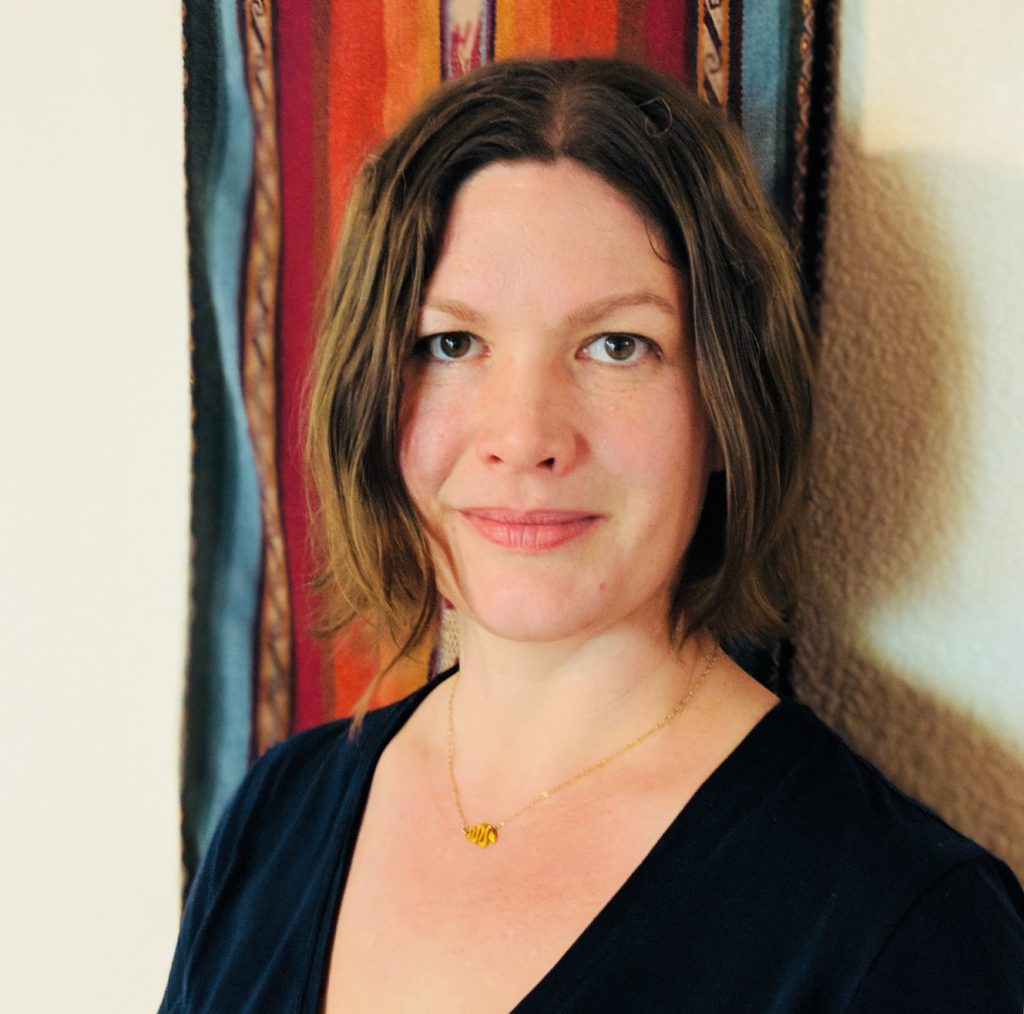 My parents loved the movie Dr. Zhivago and wanted to name me Larisa (pronounced Lara-sa). My grandma, bless her heart, couldn’t figure that one out and resorted to calling me Lala. So, my parents switched it up to LaREEsa, and called me Lara for short.

My grandma, however, continued to call me Lala.

Now, I mostly go by Larisa.

I am an animist, ritualist, and Ancestral Lineage Healing Practitioner living with my husband and son in beautiful Sandpoint, ID, on the ancestral homelands of the Q’lispe (Kalispel) tribe.

I no longer fear burning in Hell.