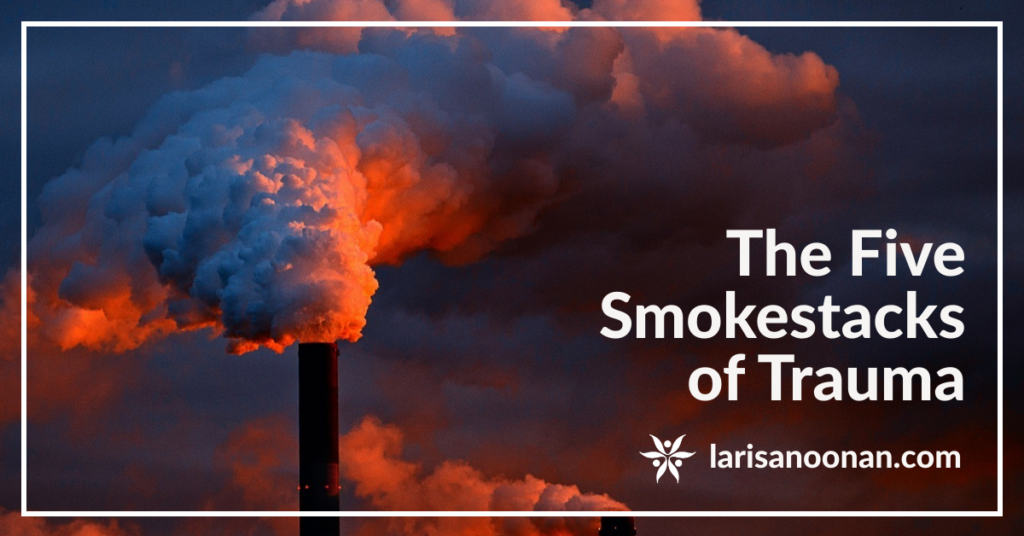 Today I bring you the third installment of the Journey of the Witchy Healer as she/they step out of the fog of fundamentalism and into the sun/moonlight of their authentic self.

If you’ve been following along, you may recall that last week I began to explore the Fog of Life… which is made up of both the naturally occurring fog created when the unseen realms touch the seen realms AND the toxic pollution coming from an ever growing number of smokestacks (or sources of trauma).

Today, we’re going to take a closer look at the various smokestacks of trauma whose smoke mixes and intermingles with the natural Fog of Life to create an ever thickening and towering bank of fog (confusion, overwhelm, pain, suffering).

Trigger Warning: following each smokestack, I have given examples of more specific forms this trauma might take. It’s fine to skip the examples if you are concerned that reading through a list of sources or trauma could activate you/your nervous system in some.

In short, the specifics aren’t so important.

What IS important is to build awareness around what makes up the fog that surrounds us and often makes life so confusing/challenging.

Categorizing sources of trauma in this way can give us a starting point; when everything is just ‘Fog’, overwhelm, confusion, helplessness, and pain are the predominant experiences. As we build awareness of the various smokestacks, we can begin to take the needed steps that will allow us to dismantle them (heal the trauma) and clarify the path ahead.

Examples: natural disasters (floods, hurricanes, wildfire, volcanic eruptions, earthquakes…), plagues, famine (although, a case could be made that many floods/famines are the result of human activity so…), accidental or early deaths… Essentially, natural trauma is trauma that, assuming all of the following smokestacks have been dismantled, will still remain. It is part of the adventure of life. There is risk in having a body and in being alive here on earth.

One insidious form of drip drip trauma is the underlying pain of living in a culture disconnected from the earth and our other-than-human kin, without trustworthy elders to turn to for guidance/direction, and without trusted others who SEE us and nurture us in our gifts (who recognize that we are a gift to the community and come bearing gifts needed by the community).

Patterns of trauma/pain that repeat throughout a lineage – much the same as personal trauma only now the pain/suffering repeats and compounds generation to generation (ie: patterns of addiction, miscarriages, random accidents, abuse… repeating throughout the generations).

When trauma is not resolved within the life of the person who experienced it, the trauma is passed on to future generations and becomes intergenerational or ancestral trauma.

This smokestack refers to the pain/suffering that is the result of living in a cultures that have systems based in oppression, dominance/control, patriarchy, colonization, fundamentalism, superiority, racism, capitalism, destruction of the natural world for profit, etc etc.

Cultural trauma is intensified by (and perhaps even rooted in) intergenerational trauma such as loss of elders, disconnection from the natural and unseen worlds, colonization by or of others, war, persecution for religious beliefs or witchy ways, loss of ancestral lands (to name a few).

Earth Disconnection: when we are disconnected from the earth, we no longer know/feel we belong and are a part of nature/earth which leads to things like exploitative capitalism, viewing of nature/the earth as separate from us and here only for our benefit (resource extraction, etc). This is traumatic in that we lose that deep sense of knowing that we are part of the earth around us (vs separate and superior).

Loss of Elders: perhaps some natural disaster (flood, plague, famine…) led to many of the elders dying all at once and their wisdom/guidance lost. Perhaps a key elder who held specialized knowledge needed by the larger community (about healing, plants, how to tend the ancestors/care for people when they died, etc) was unable to fully pass on their knowledge to the next generations.

Perhaps elders were persecuted for sharing their wisdom/skills when another tribe or faction with differing views/beliefs colonized them. Perhaps, like here on Turtle Island, the children were separated from the elders and placed into boarding schools so they couldn’t learn their indigenous way of relating to the earth and each other.

A personal example: as I worked with one of my ancestral lines, I was shown how my people had to abruptly leave their ancestral lands (fleeing religious persecution). The elders in the community weren’t strong enough to make the journey and were left behind. There was much grief and also, in order to ensure the survival of the greater community, that was the path that had to be walked.

Colonization By and Of Other Peoples: for instance, here on Turtle Island (mostly) European people arrived, claimed, and settled the land by whatever means necessary including the wiping out of indigenous people and their beliefs/ways of living. This included attempting to convert the ‘heathens’ into the European’s ‘more sophisticated’ beliefs, languages, and ways of life.

What interests me here is how, for myself anyway, when I think of my own European ancestors, I tend to think of them as having been colonized… of other cultures (like the Romans) coming in with their beliefs and force and uprooting my people’s traditional, earth-honoring ways of life.

In more recent generations, going back at least into the 1500s, my people have been persecuted and forced to flee from persecution as others attempted to colonize them. And, before that, who knows? It’s very likely, my people did the same to others at some point.

Even in recent generations, as missionary work plays strongly into my ancestral lines, it is clear that my direct blood relatives have been a force for colonization in various parts of the world.

From this perspective, even as my ancestors were being persecuted themselves, they were attempting to convert others to their beliefs and ways of life; even recent generations were both colonized and colonizer.

My point: in some ways it is easier to imagine myself/my people as the victim versus the perpetrator and when I write ‘colonization of others’ I’m pointing to the fact that everyone most assuredly has both in their lineages and therefore, in themselves (in ways we might not even recognize).

A case in point – how many times in a week do I attempt to impress the rightness of my view on my husband? To attempt to convert him to my point of view using whatever force (shame/ridicule/logic) is needed?

Being raised in a fundamentalist home is traumatic. While there might be instances of boom-boom trauma, most often a fundamentalist upbringing results in the more confusing and insidious drip-drip form of trauma where we are never seen for who we are, are expected to be/act a certain way only, and to repress our natural curiosity, instincts, and intuition.

Being raised in a fundamentalist home is traumatic as well because so much of what we are taught (about what is right, how the world works, how we are supposed to think) simply becomes who we are to the extent that it doesn’t even cross our minds to question any of it.

We are as we’ve been indoctrinated. There is often little-to-no space between us and the fundamentalist beliefs.

Further, people growing up in fundamentalists homes are actively taught NOT to question anything of their experience. For instance, the hierarchy of God-Man-woman is so ingrained within us that we often don’t even think to question the superiority of men and/or actively repress any discomfort that might arise as our souls attempt to tell us that we, as women or other-gendered persons, are not inferior to men (or to God). Different? Yes. Inferior? No.

However it happens, the result of this unresolved trauma, of all these smokestacks spewing toxins and pollutants into the air, is that we live in a toxic fog.

Healing each of these five types of trauma is like dismantling a smoke stack and we can breathe a little easier and see a bit more clearly.

As today’s piece is a bit heavy, I want to reassure you that as we move forward this journey I am taking you on will become a bit lighter. Today we are exploring the territory (fog) that we are all already living in, whether consciously or unconsciously. In the next installment, we’ll start to explore our relationship to this Fog including how to be in an empowered relationship to both the Fog of Life and the Smokestacks of Trauma.

Until then, all my love,
Larisa

ps. as always, I welcome your thoughts, questions, personal shares. I invite you to contact me and let me know how this exploration has landed. <3

pps. additionally, I invite you to join me for Embodiment, Boundaries, and The Ancestors, the first step out of the fog and into clarity. I’ll leave you today with an anonymous share from a previous participant.

I understood that my main issue with boundaries is that I never was modeled them as I should’ve been and I grieved that a lot. Also, I allowed myself to feel at ease with a male ancestral presence, something that at the beginning of the course sounded ultra scary. I also had the experience of calling my power back to me; it felt really…. real (haha).

I loved the course. The delivery was amazing, I loved the accountability of the live calls, it really made a difference in the effort I put into actually going through the exercises (vs just signing up and trying to find a time “later” aka never).

I don’t know what I’d change about the course. I really think it was one of the best I’ve taken. It was simple, to the point, and useful.

I’m really thankful I got to participate in this, thank you so much for everything! You are one of the best facilitators out there, you really are!

The Fog Of Life
Your Space, Shared Space