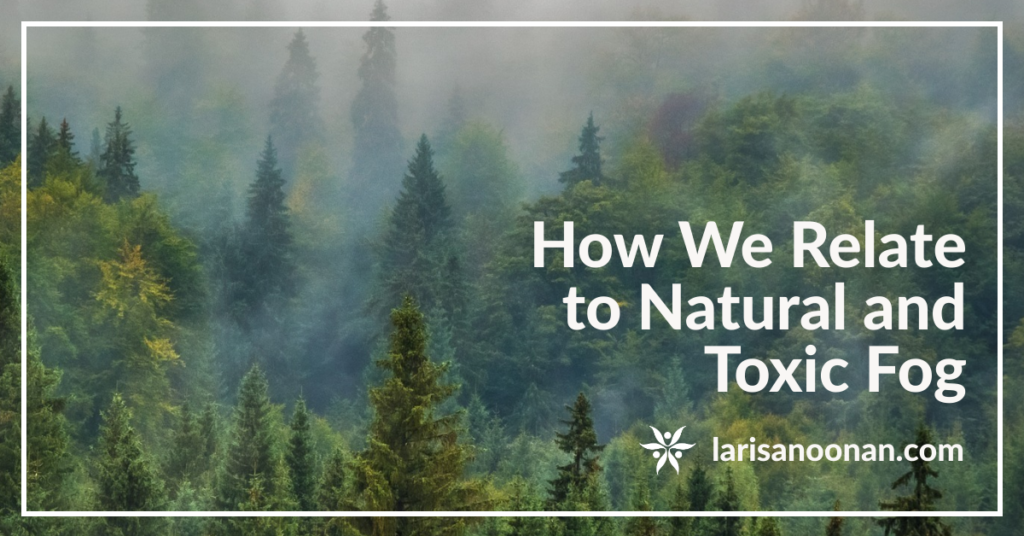 In The Fog of Life, I describe how the confusion, overwhelm, pain, suffering (the fog) that we experience is made up of both naturally occurring fog (where the unseen realms touch the seen) AND the toxic pollution coming from an ever growing number of smokestacks (or sources of trauma) which I explored in more detail in The Five Smokestacks of Trauma.

Today, we’re going to explore our relationship to both healthy fog and the toxic smoke or pollution.

Dis-empowered Relationship with the Natural Fog of Life

When we relate to the Natural Fog of Life from a dis-empowered stance, we tend to:

At an extreme, we might even find ourselves in an ill advised attempt to eliminate all fog and to treat natural fog with the same disdain as pollution.

When we are relating to the Fog of Life from an empowered stance, there is:

We are able to:

Dis-empowered Relationship with the Toxic Smoke or Pollution

When we relate to the Toxic Smoke from a dis-empowered stance, we tend to:

Empowered Relationship with the Toxic Smoke or Pollution

When we are relating to the Toxic Smoke or Pollution from an empowered stance there is recognition and acknowledgement of the sacred nature of the pollution as well. There is also recognition that, while the pollution is both within and without (internal and external to the witchy healer), there is also goodness and support both within and without.

We can choose, with this support, to move into and through the pollution in a way that brings reconciliation and healing and that restores harmony in both the seen and unseen realms.

Additionally, when relating from a place of personal power/sovereignty, it is possible to see the pollution as pollution and to use it to trace back to the source of where it’s coming from. You can follow the smoke back to the smoke stack. This allows you to do something about it.

From this perspective, symptoms become guides that bring us to the source of the troubles and, in resolving those troubles, bring healing to ourselves and the wider community.

It is possible to be in an empowering (or dis-empowering) relationship with both the naturally occurring fog and the toxic smoke or pollution. Becoming aware of how we relate to the fog (both natural and toxic) gives us a starting point for reclaiming our power (if needed) and taking the next step on our healing journey.

Your Space, Shared Space
The Upsides and Downsides of Natural Fog and Toxic Smoke