It’s very, very early morning. That gray, pre-dawn time as the world begins to brighten. The sun has not yet popped up over the horizon but it is obviously on its way.

I’m all snuggled up in bed, warm and cozy. Then, abruptly, all hell breaks loose.

Our backyard scrub jays begin shrieking. And shrieking and shrieking. In fact, it sounds as if they have invited all their neighborhood friends into the walnut tree directly outside my bedroom window. To shriek.

The ruckus, it was enormous.

Too sleepy to drag my protesting body out of bed to see just what the commotion was all about, I just listened until, about 10-15 minutes later, all became quiet once more.

I tumble back into sleep. Morning fully arrives, I get up and eventually I recall the ruckus and decide to investigate.

I have a good idea what I will find and indeed, curled up in a hollow of the walnut tree, a good 20 feet off the ground, is a pile of gray fluff. A raccoon!

Now, whatever you happen to think of raccoons is fine.

Anyway, I felt so indescribably happy standing there on the roof peering up into the hollow.

Graced with the presence of urban wildlife – young urban wildlife at that. This particular raccoon was not even half grown – likely born just this past spring.

He (she?) shifted and suddenly, up briefly popped a second head. There were two!

Oh! The happiness! It compounded.

They shifted around a bit more, eyes half closed. Eventually one of them settled back into sleep with his head cradled on the edge of the hollow.

As I watched, he sank deeper into sleep. As his body became more and more relaxed, his head slid along the edge of the hollow until his neck and head were basically dangling outside the hollow.

Oblivious, he slept on. 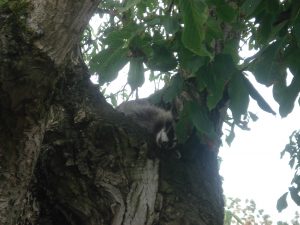 I sent my dad this picture and he texted back: “New goal… learn to relax like a raccoon.”

What can a raccoon teach us about relaxing and about being ourselves?

Last summer I watched a fully-grown raccoon returning to our neighbors giant Doug Fir. The jays shrieked and dove. The raccoon, completely oblivious, continued along its raccoon path and eventually curled up somewhere in the deep recesses of the fir.

The raccoon was completely unperturbed by the rants and attacks of the jays.

*SIDENOTE: of course, the jays are attacking because raccoons are predators and do raid their nests. However, the times I’m referring to here are times when the raccoon is returning from her nightly forage to sleep, no longer in hunting mode.

Just an afternoon prior to the morning initially described, the jays had suddenly started shrieking and I went to investigate. A raccoon was nestled in the same hollow. He was awake but absolutely relaxed and ambivalent to the jays screaming above him.

He was just a raccoon doing his raccoon thing.

Which got me to thinking…

The more I am me, doing the things that are meaningful to me and living my life as closely aligned with the qualities (love, kindness, compassion…) I treasure, the less the attacks of others will affect me.

In fact, it’s likely I won’t even perceive the unkind words or actions of others (or the world in general) as a threat at all. It is just them being them. I am just me, being me.

Nature is an inescapable model for being yourself.

Most of us do, however, spend a ridiculous amount of energy attempting to be (or to appear) other than we are.

While the reasons for this are many and varied, the more time we spend observing nature (especially while in Owl Eyes), the more these reasons fall away.

Spending even just a couple of minutes watching a bird, a squirrel, a deer (or a beloved pet) brings us back to ourselves. That animal simply can’t be other than it is. On some level, whether consciously or not, we are reminded that we also can’t be other than we are.

This state of *being* calls out to the deepest parts of ourselves.

We are reminded that we are enough, that we belong, just as we are.

Knowing these truths, we can let go of our guarding and tension. We can relax… just like the raccoon.

The Art of Magical Listening – a DIY Guide!
The Hardest Thing in the World